Zoysia grass has become a firm favourite for residential and commercial lawn growing applications throughout Australia thanks to its toughness and ability to survive and thrive in poor soils and growing conditions.

Zoysia grass forms slow-growing mats of grass that are low maintenance and yet very durable against wear and tear.

The Zoysia genus is found throughout the tropical and temperate zones of Asia, the Pacific and Australia, which explains its ability to cope with Australia’s sometimes unforgiving climate.

Turf breeders have explored to the very grass roots (excuse the pun) of turf cultivation in their search for the perfect Zoysia lawn for Australian conditions.

This has given rise to a number of Zoysia grass species popular throughout Australia.

You can learn more about the different Zoysia grass varieties further down the page.

Here at Atlas Turf we believe the Empire Zoysia (Zoysia japonica) variety is the best one for most Australian conditions and here’s why.

Empire Zoysia is one of the most drought-resistant grasses available. It thrives in full sun, even in the hottest most humid areas and yet will happily cope with highly shaded conditions.

In fact, Empire Zoysia is more drought resistant than other tough lawn varieties including Kikuyu, Couch, and Buffalo grasses. 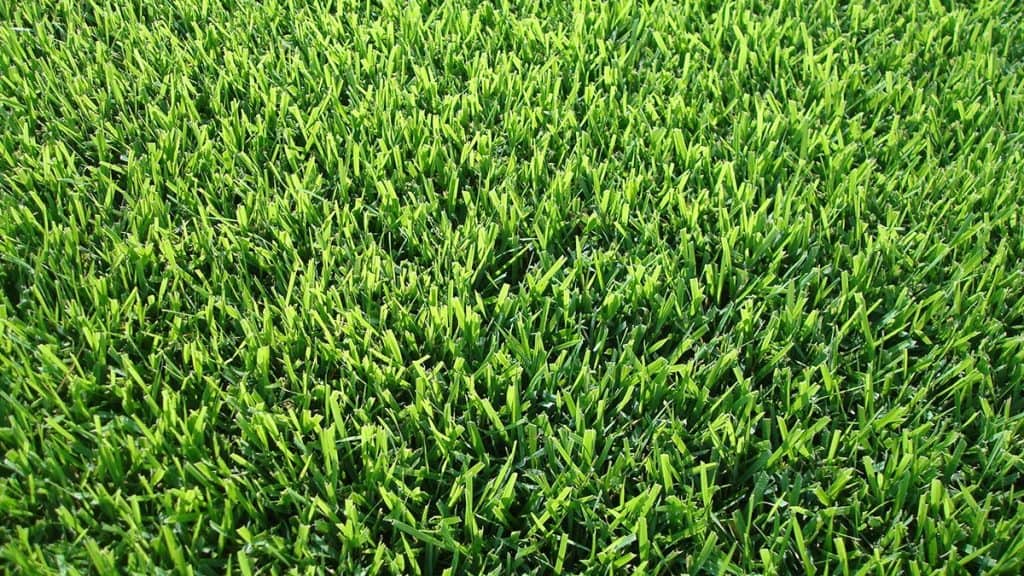 Its deeply rooting runners and rhizomes allow it survive on natural rainwater alone. This makes it a great choice for lawns where frequent water restrictions limit your choice of turf varieties.

Despite the toughness of Empire Zoysia, it is a soft bladed grass with a rich green leaf that is quite similar in appearance to soft leaved Buffalo grasses.

This growth habit allows your Empire Zoysia to display rugged durability, high wear tolerance as well as the ability to rapidly recover from any damage and heal over dead patches.

Empire Zoysia grass demonstrates very high levels of shade tolerance. It can tolerate up to 50% shade in areas that receive little wear and tear and even under heavy use will still cope with as much as 30% shade.

In colder regions that are prone to frosts Zoysia may display some browning off. This is normal and the grass will quickly green up again as temperatures start to climb once more.

In fact, come spring Empire will green up more quickly than Buffalo even in very cold parts of the country.

Deeply rooting runners allow it to draw nutrients and water from even the poorest soils and in dry conditions, and also enables it to recover quickly in the event of damage.

Empire Zoysia grass is one of the lowest maintenance grasses available in Australia. Its natural insect, disease and chemical resistance ensures you need to do little but sit back and enjoy. 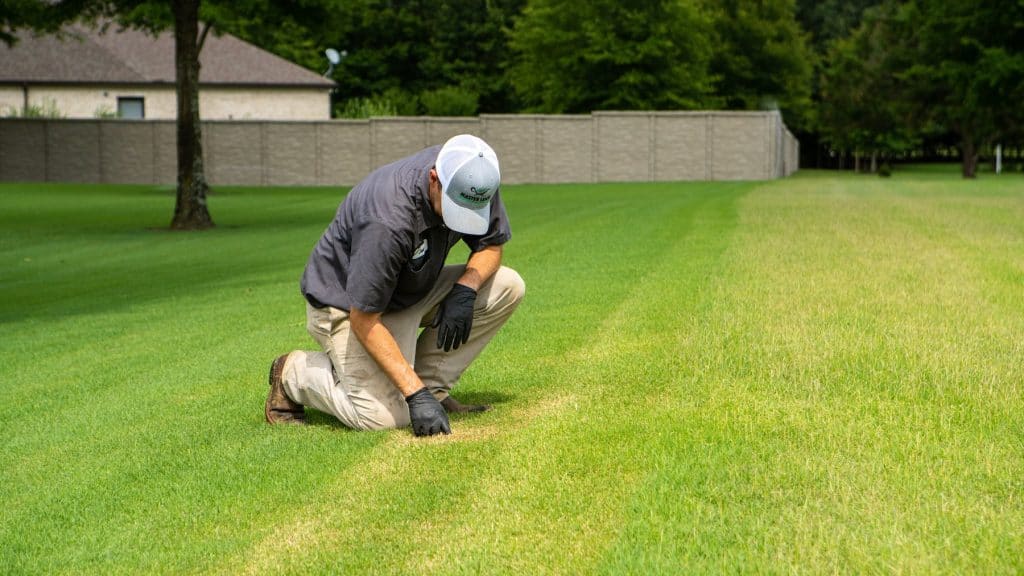 As with any turf variety applications of fertiliser from time to time will benefit grass health but these requirements are lower than for most other turf varieties.

With Empire Zoysia you’ll need to get your lawn mower out far less often than with almost any other turf grasses grown in Australia today; a real plus for the homeowner.

Mowing every 2 weeks will be enough to keep the lawn at its optimal height (35-45mm) in the peak growing seasons; a light mow every 4 weeks in winter will suffice.

This gives a real advantage on steep slopes and in landscaping areas can save you a significant amount on maintenance costs.

Empire Zoysia is a member of the Zoysia japonica family.

Empire Zoysia is famed for its drought resistance, wear tolerance, low water and low maintenance requirements, and ability to thrive in full sun.

It’s a very attractive turf with its dark green soft blade leaves and is ideal for all parts of Australia.

Nara Zoyzia is a Zoysia macrantha variety that is descended from a Queensland native grass. It is quite slow growing but thrives in salty conditions in warmer climates. 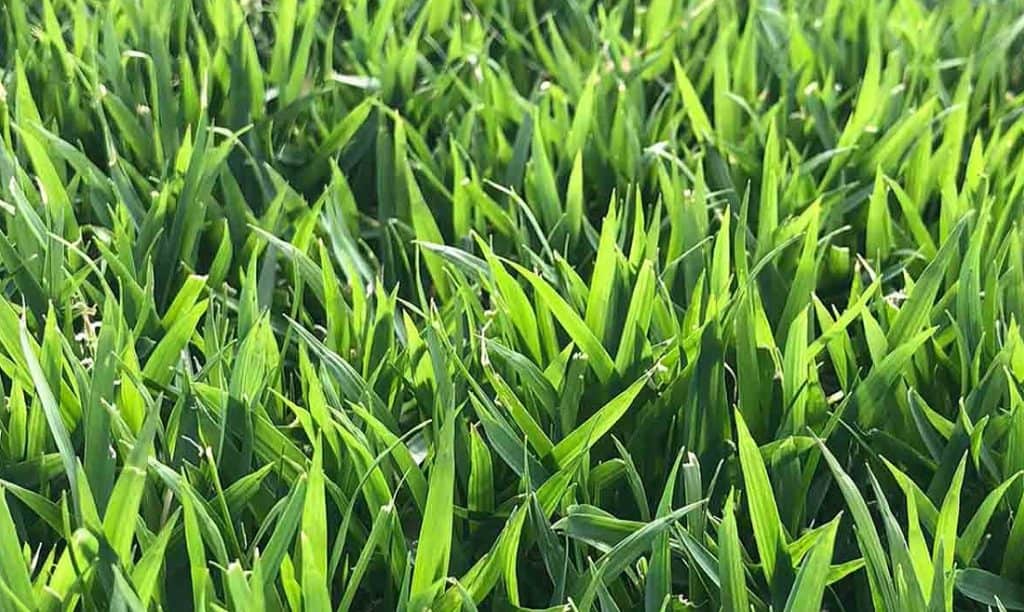 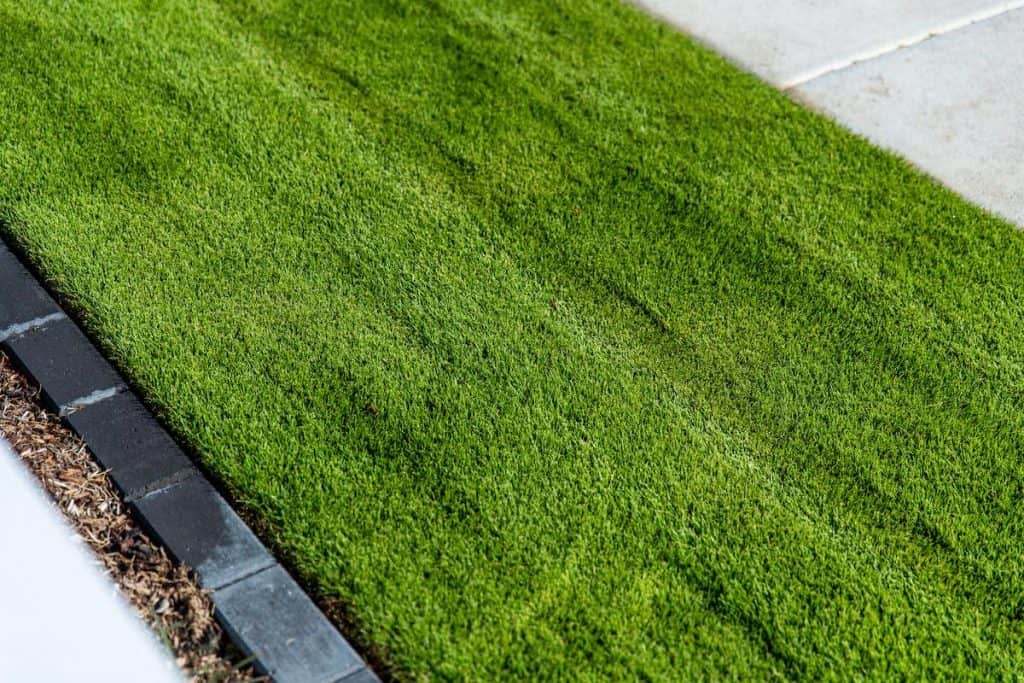 A great deal of research has gone into the development of this turf and it is highly popular in the US where it is a common choice for golf fairways.

Sir Grange Zoysias are highly regarded for their drought tolerance and hardiness and are suitable for lawns throughout Australia.

Zoysia Macrantha is the only true native Australian zoysia and is found in Queensland. It’s sometimes known as prickly couch.

Nara Native Zoysia and Stockade Native are both Macrantha varieties that are sold in Australia.

Macrantha typically prefers the warmer regions of Australia. Macrantha leaves tend to be coarser than other Zoysia varieties and don’t cope as well with wear and tear or shade.

Zoysia Japonica is originally from coastal areas of South East Asia. Empire Zoysia and Platinum Zoysia are two of the most well-known Zoysia Japonica varieties in Australia.

Japonica’s typically produce have a leaf with a soft to medium leaf texture.

Zoysia Japonica turf grass is renowned for its drought tolerance, low maintenance requirements and ability to cope with shade.

Japonicas thrive in warmer parts of Australia down both East and West coasts but are subject to some browning off in cold parts when exposed to frosts and snow.

They can be grown in all parts of Australia are boast low maintenance and watering requirements.

Zoysia tenuifolia is another native from Sout East Asia. Some of its common names include: Mascarene grass, Korean or Japanese velvet grass, or No mow grass.

It takes a very long time to grow to 10cms and is not really suited for your typical neatly mown lawn as the re-growth rate is so slow.

Tenufolia is a warm season grass and has only moderate drought and frost resistance but will thrive in hot humid climates and very shady areas.

Zoysia ZT-11 is a hybrid cross between matrella and japonica varieties. It produces a bright lime green leaf. It copes with up to 50% shade and requires little mowing or maintenance.

Where Does Zoysia Grass Grow Best?

There is a Zoysia variety available to suit your local climate wherever you are in Australia but most Zoysias are ‘warm season’ grasses that thrive most readily in tropical and sub-tropical zones.

Empire Zoysias are suitable for home lawns in all parts of Australia from Cairns to Hobart and all the way down the West Coast with the exception of the very coldest parts of the country.

Will Zoysia Take Over Other Grasses?

Empire zoysias will not usually take over other grasses or areas where you don’t want it to grow.

Some Zoysia varieties introduced into Australia in the early years developed a reputation for becoming invasive but Empire Zoysia’s growth rate, while fast enough to out-compete weeds, is not nearly as rapid as those earlier varieties.

You can easily keep lawn edges trimmed with the occasional use of an edger and that will keep Empire Zoysia exactly where you want it.

Is Zoysia Grass Hard To Maintain?

No. Empire Zoysia is one of the lowest maintenance grasses available in Australia. 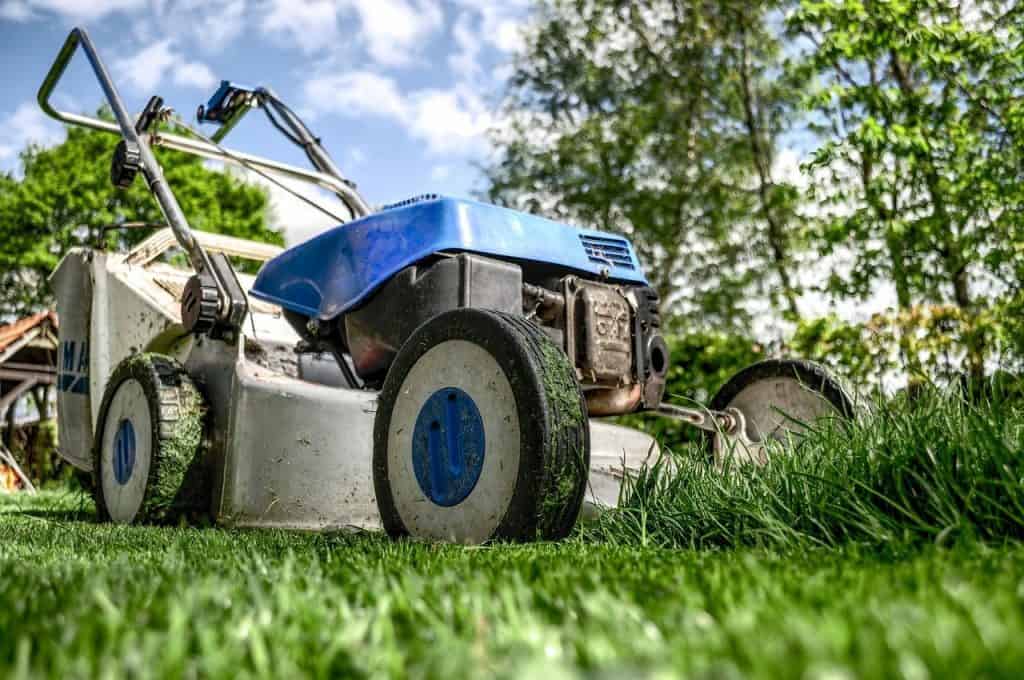 Its natural pest and disease resistance means you’ll need to apply other chemicals very rarely. Empire Zoysia is highly resistant to the fungal diseases that often affect other grass types on the East coast.

Empire Zoysia is not very attractive to lawn grubs and so you will have fewer lawn grub problems and any infestations will typically be less severe that for other grass types such as Kikuyu, Couch, and Buffalo.

Fertiliser applications in autumn and winter will help Empire to retain its lovely green looks.

Will Zoysia Choke Out Weeds?

Yes, Empire Zoysia forms a dense mat of grass with deep runners that crowd out the light available for weed growth and out compete most weeds for root space in the soil and nutrition.

Its ability to self repair when damaged also allows it to beat the weeds in dead or scalped patches.

If you find weeds are becoming a problem then you’ll be relieved to know that Empire Zoysia is resistant to most herbicides.

Do always check the herbicide label for Empire friendliness before applying.

As with all lawn care, keeping your Empire Zoysia healthy is the critical key to preventing weed growth.

Empire Zoysia has one of the highest upfront costs but its low maintenance and mowing requirements combined with its rugged durability and rapid repair ability will save you quite a lot of money over the long term.

You’ll save money on equipment maintenance and usage, as well as through reduced chemical requirements.

And you’ll save time on lawn care leaving you free to do the more important things in your life.

How Fast Will Zoysia Spread?

Empire Zoysia finds the perfect balance between the rapid regrowth necessary for self healing when damaged and the slow grass growth so desirable for low mowing requirements.

Generally, Empire will spread more slowly than other grass types. 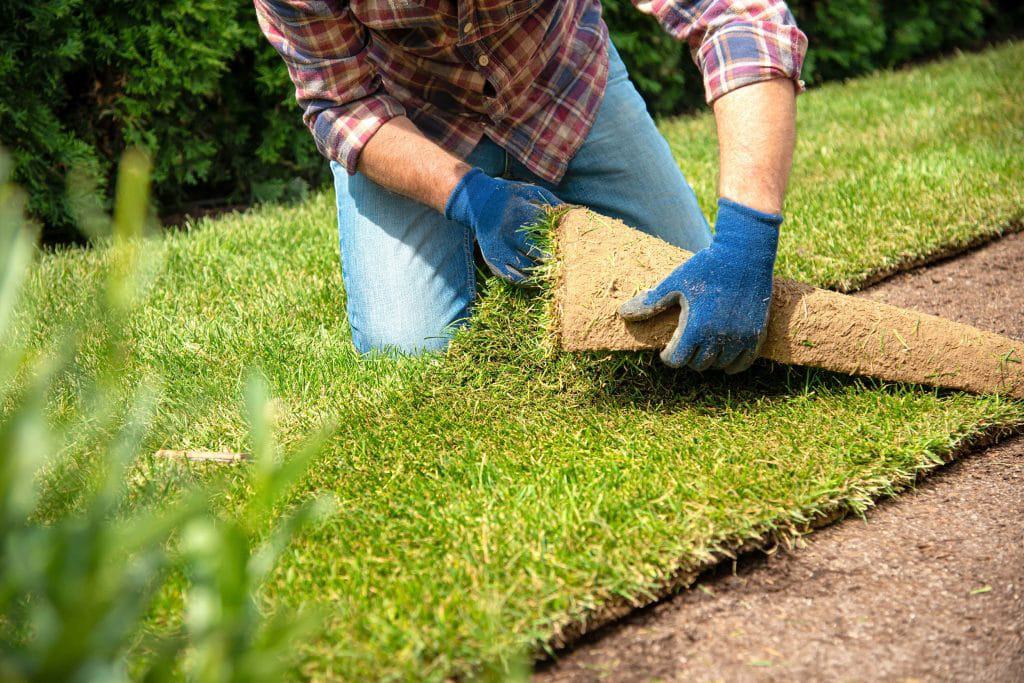 This means Empire Zoysia may take a little more time to become established than other lawn types but you can speed up its growth rates with fertiliser applications.

The big advantage of this relatively slow growth rate is of course the greatly reduced need for mowing your lawns.

How Short Should You Cut Zoysia Grass?

The ideal height is between 35 and 45mms.

Empire Zoysia will recover quite quickly if you scalp it but as with any turf you want to avoid cutting the grass too short or damaging it as much as possible.

Does Zoysia Need A lot Of Water?

Empire Zoysia is famed for its low watering requirements.

You won’t need to water your Zoysia turf in the winter and in the driest months 40ml per week (Over 2-3 days) will be ample to keep your Zoysia looking its beautiful best. 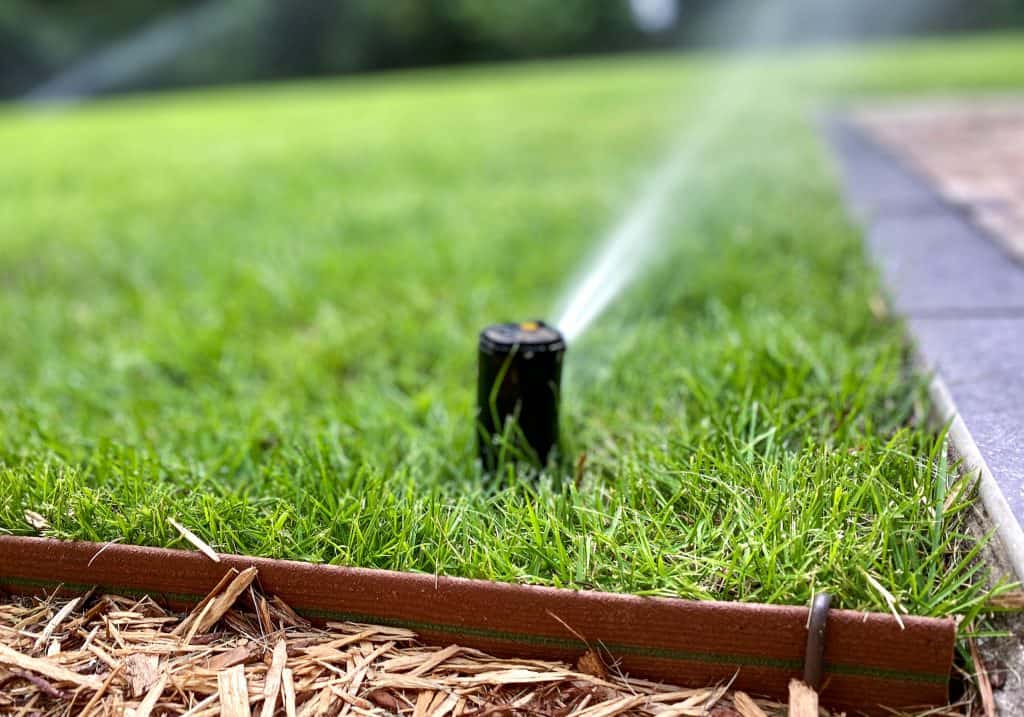 You’ll need to water a little more frequently when your Empire turf is first installed until the grass establishes a deep root system.

Water daily for the first 7 to 10 days or until the lawn is well established.

If you’re looking an extraordinary all-round low maintenance grass for your region then you can’t go past a Zoysia lawn.

Talk to the experts at Atlas Turf today about the stunning characteristics of Empire Zoysia; it’s one of the best all-round lawn grasses available today.