We have been looking at how different buffalo grasses compare however this time we are going to put Sir Walter up against a Zoysia turf to see how they compare.

Specifically we will be looking at Empire Zoysia grass. In this article we compare the two lawns in the following categories:

So let’s find how how our two contenders fare in this battle between Sir Walter Buffalo vs Empire Zoysia. 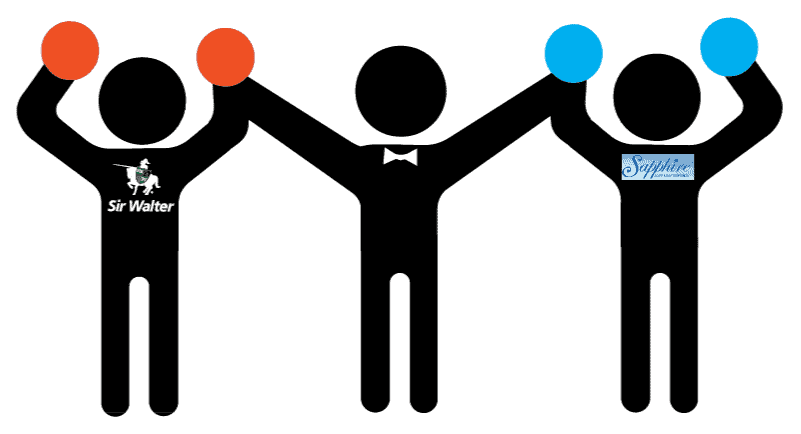 While a thin layer of thatch can provide insulation against extreme temperatures and fluctuations in soil moisture, thicker layers of thatch can heat up and dry out a lawn very quickly.

Sir Walter is a low thatch type of Buffalo grass. Empire Zoysia is known for its ability to create a dense sward without major thatch problems.

It is important to consider where you will lay your turf and what kind of conditions it will be subjected to. Will it have to deal with full shade, partial shade, or full shade?

And if so, which turf will be best suited for this location?

So how well will our turf contenders tolerate shade?

Empire Zoysia prefers a warmer climate and may be less appropriate for temperate zones. Empire Zoysia will tolerate moderate shade.

Buffalo grasses like Sir Walter have an impressive shade tolerance and does a bit better than Empire Zoysia in this regard.

All plants need sunlight to grow, and grass is no exception — but too much sun can lead to your lawn drying out and potentially dying.

Australia is a sunburnt country; so how will our turf contenders deal with the sun?

In the same way that we need to consider sun and shade, if you are an area that is prone to drought you need a lawn that can not only tolerate lower water conditions but can bounce back when the rains return or you choose to irrigate.

DROUGHT RECOVERY IS A PARTICULAR IMPORTANT CONSIDERATION FOR AUSTRALIAN LAWNS

Empire Zoysia grows slowly and has a slower recovery rate, while Sir Walter has a faster growth rate under normal circumstances it does tend to slow under drought conditions.

While Empire Zoysia and Sir Walter are fairly equal in this regard, if you live in a drought prone area you might want to consider one of our other contenders.

Can our turf contenders deal with wear and tear of foot traffic, kids, sports and pets?

Sir Walter is a quick growing grass that tends to repair itself and can tolerate a fair bit of wear and tear from foot traffic, pets, kids and sports.

Empire Zoysia is a slow growing turf and may take longer to recover.

If you’ve taken the time to lay quality turf and maintained it, the last thing you want is to lose that luscious green colour in the cooler months.

How well will our lawn contenders keep their green colour in winter?

While Sir Walter may have won this round, both Sir Walter Buffalo and Empire Zoysia are impressive turf choices.

Think Empire Zoysia for a luxurious soft zoysia grass that is particularly suited for warmer climates such as Northern NSW and Queensland.

Think Sir Walter for a good all rounder that will perform in more temperate regions such as Sydney and Southern NSW.

We're sorry, but we can only deliver Sir Walter turf right now. For all other turfs, please add you name to the WAITLIST! Dismiss